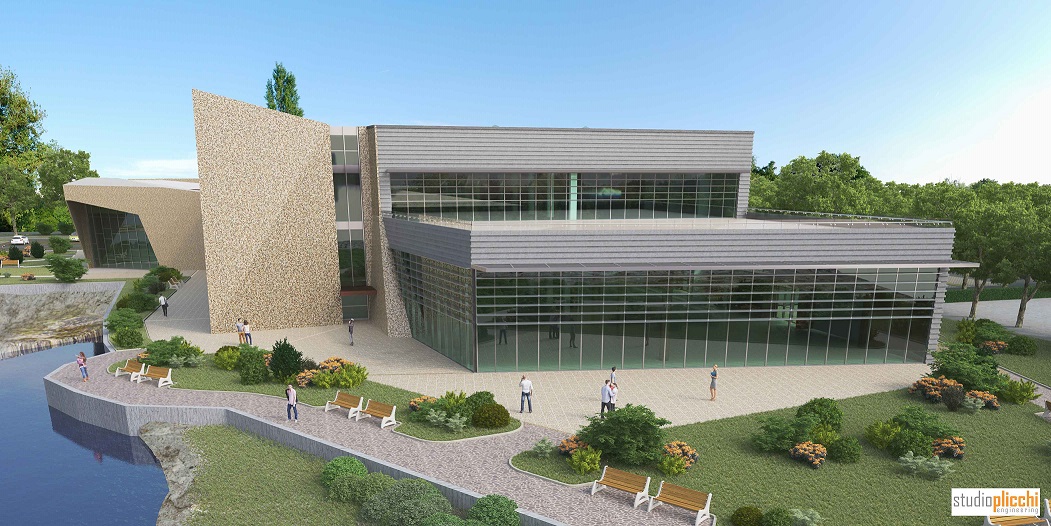 CIPNES implements the P.T.E. (European Technological Platform) through the Programme Agreement concluded with the Sardinia Region, Municipality of Olbia and the Province. We are talking about a multifunctional Technological Pole, dedicated to the development of an articulated territorial marketing program for the identity production activities promotion of Sardinia, with focus on food and fish supply chains, artistic handicrafts manufacturing, design and boating, together with the territories promotion.

The area destined to host the Platform has been identified within the consortium production district of Olbia and extends for about 100,000 square metres along the Olbia-Golfo Aranci coast road, in the part overlooking the Olbia Gulf.

In an area of about 10,000 square meters, the ground floor of the multifunctional park will be used for the INSULA- Sardinia Enterprise territorial marketing platform as a permanent expo for the development of the agro-zootechnical, food, handicraft and design production chains, and will be composed of taste workshops, theme showrooms, food and wine islands, the arts and crafts hall  and the events square.

The first floor will host the internationalization department, the integrated supply chain production certification and the offices for the development of strategic and multimedia marketing in support of actions to promote and develop the production chains of the territories, an incubator and accelerator of businesses for innovative start-ups and classrooms for training (Training Pole).

CIPNES-Gallura has joined the network of educational and training institutions called Olbi@inLab, which promotes the creation of an innovative pole spread throughout the north-east Sardinia territory, with project proposals related to territorial laboratories for employability to be implemented as part of the National Digital School Plan PNSD.

The Olbi@inLab project, which has been joined by CIPNES-Gallura, municipality of Olbia, CNA Gallura, FabLab Olbia, Confartigianato Gallura, Chamber of Commerce of North Sardinia, kindergartens, primary and secondary schools and Higher Education Institutes, will be reserved a special equipped space inside the emerging P.T.E. of about 600-700 square meters, in which innovative didactic activities closely linked to the initiatives characterizing the Technological Pole will be carried out, in order to create a real interconnection between the school world, transformed into a centre of research and methodological innovation and the local business world projected towards a future of technological and economic development.

The objective is to promote creative and digital youth entrepreneurship: the contextual presence of entrepreneurs, companies, professionals and students in the same space will be a favorable creative precondition to identify and experiment with models of entrepreneurial contamination, support (maternage), to focus on the spin-off dynamics and companies tutorship towards new business ideas.

The Multifunctional Centre P.T.E., in this sense, has been conceived as a strategic physical space suitable to create new business, consolidate it, assist it, support it in order to project it in a globalized economy context.

The involvement of public and private partners, representatives from the world of training, education and research (such as the University of Sassari and the Olbi@inLab network of educational institutions) will contribute to this goal through instances, intuitions, ideas and content to select the best startuppers to make them grow rapidly .

Within the P.T.E. structure there will also be a nautical pole where a refitting yacht project will be developed.

Indicative report of the INSULA project 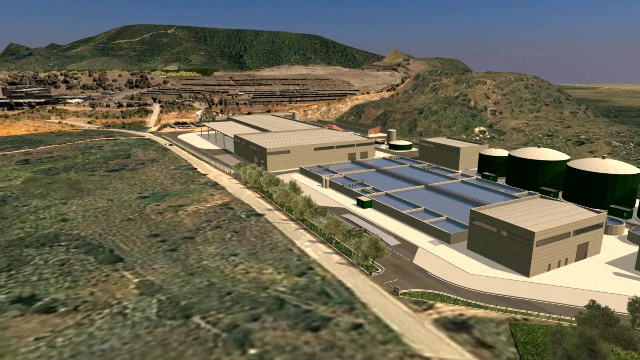 For Cipnes remains highly strategic the objective of realizing an anaerobic digestion plant with the production of the organic fraction from differentiated collection of approximately 25.000 tons per year of biomethane, for the benefit of the companies of the industrial agglomeration of Olbia, the population of the city and the Mater Olbia Hospital, owned by the Qatar Foundation, soon to be opened in the south of Olbia.

"The landfill - says engineer Gianni Maurelli, in his capacity as designer - has a completely emergency and residual character: the Cipnes will have to use it until the Macomer waste-to-energy plant (whose works should be completed in 2019 at the latest), will be completed, as established by the Regional Waste Plan. At that point, the small landfills, in each regional territory, will have only an emergency function. Biomethane - continues Maurelli - is part of a context of circular economy in which from a waste is produced both compost and biomethane; the same circular economy will be applied for the treatment of glass, paper, cardboard, plastic, cans, aluminum".

Biomethane will also cover the energy needs of more than 40% of the city of Olbia and a substantial part of the companies located in the consortium industrial agglomeration, with a significant saving in energy bills, and the reduction of tariffs for the treatment of urban and similar waste (currently estimated at 3.5 million cubic meters per year), with revenues for incentives of about 3.5 million euros. 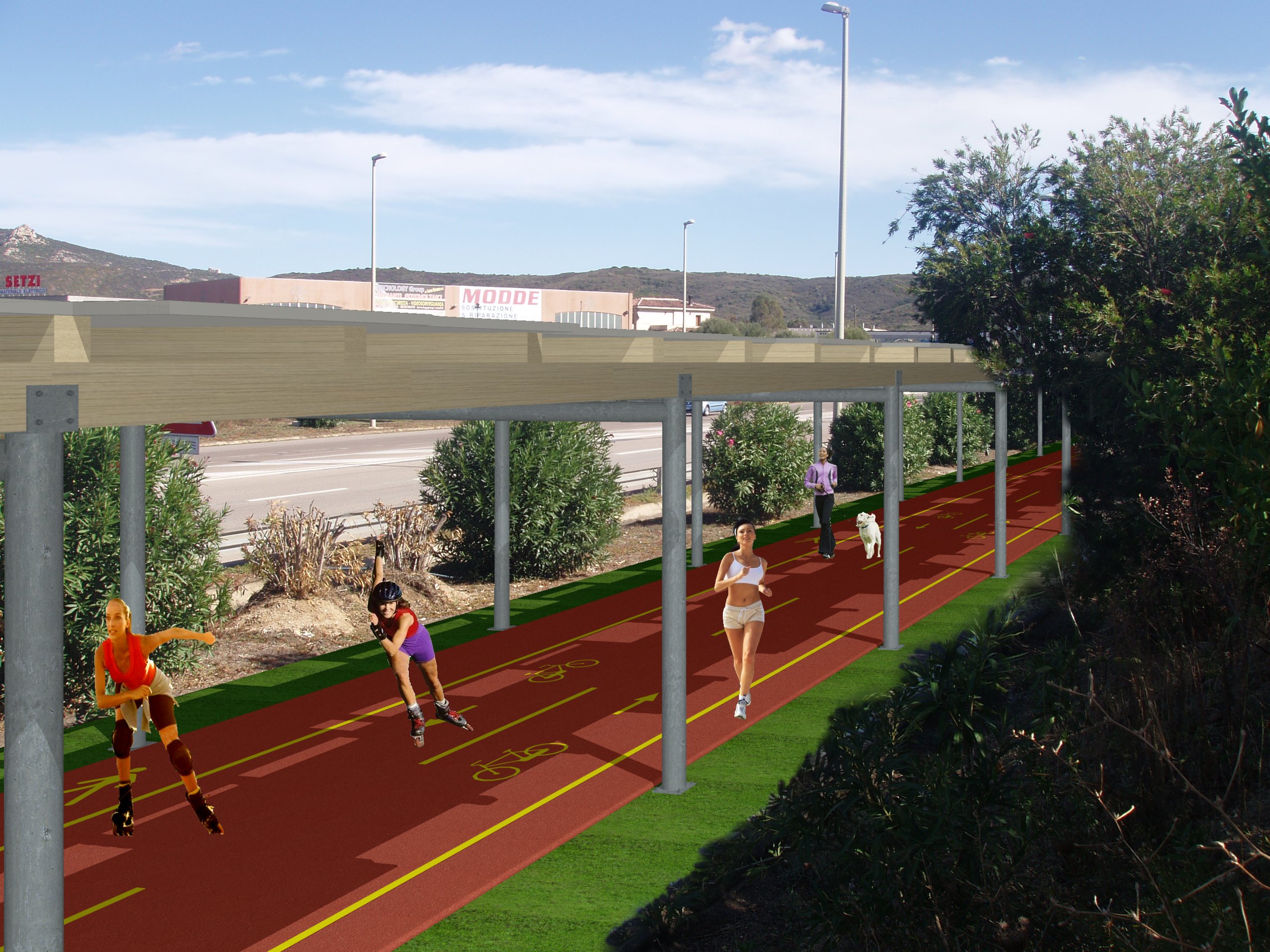 The Industry Regional Department has granted the Cipnes Gallura the Sole Authorisation (determine 244 of April 23, 2018) for the construction and operation of a plant for the electricity production from renewable solar photovoltaic energy with a capacity of about 2 MWp (to be exact 1969.92 kWp), located on projecting roofs of a cycle and running track within the industrial area of Olbia. The work is already financed with a 0 interest rate loan of 4.75 million euros, granted with Jessica funds from the European Community.

The cycle and running track, whose works will start in September 2018, will be built with coloured photovoltaic panels and will wind, starting from the city of Olbia, continuing along via Indonesia (right at the beginning of the agglomeration), through the coast of the industrial area to "Pozzo Sacro", not too far from Pittulongu's beaches to Golfo Aranci. The route will have a length of 3.5 km. and a width of 4 meters and will be covered by 18,000 square meters of photovoltaic panels. In particular, the 7296 modules will have a power of 270 Wp each, for a total power of 1969.92 kW divided into three different connection points: the first (1821 panels, equal to 492.48 kW) at the drinking water purifying; the second (3648 panels, 984.96 kW) at the purifier and the third (1824 panels. 492.48 kW) at the headquarters.

The project identifies rest areas or stations, as foreseen in the bike sharing, a sustainable mobility tool available to administrations that intend to support the use of public transport. The bike sharing involves the installation of stations at different points of the track where electric bicycles can be placed after their use and to recharge the batteries. The bikes will be locked or can be used with a key or a magnetic card. The service is therefore not available to everyone, but requires a registration for the keys or the card delivery; in this way the theft is discouraged, since you know who used the bike at that time. The energy produced by the photovoltaic plants will allow the Cipnes to zero or in any case to significantly reduce the consortium energy bill, which in recent years has recorded important increases both due to the higher costs of hydrocarbons and the increase in consumption due to implementations and improvements in the various phases of the landfill treatment and the consortium purification plants. In addition, the facilities will provide concrete environmental benefits because they are being built in areas that are already degraded and compromised.