The Provincial Industrial Consortium CIPNES-Gallura plans, infrastructure and manages three production districts located in the municipalities of Olbia, Monti, Buddusò-Alà dei Sardi, for a total area of about 850 hectares, of which 757 hectares are entirely in the municipality of Olbia.

The Olbia productive settlement extends for about 7,570,000 square meters and is located 5 km from the main airport of North-East Sardinia (Olbia-Costa Smeralda airport), 3 km from the passenger and commercial port and 1 km from the main road of Sardinia, the SS 131, which connects the industrial port of Porto Torres to the metropolitan city of Cagliari. It also occupies a portion of the coast (for an extension of about 4.5 km) of great environmental value, is adjacent to the city of Olbia, from which it branches off almost seamlessly.

The industrial consortium district of Olbia is an ecosystem of strong local attraction for the economic activities of the commercial sector, industry, crafts, services and accommodation. There are also production, manufacturing, handcraft and general services of supra-urban interest. During these few decades there has been a considerable increase in the number of enterprises in the tertiary sector such as business services, research, training, information technology and software, inter-companies linked to the economy of tourism with sports facilities, accommodation, congresses served by modern telematic technologies, thus confirming a typical phenomenon of an advanced economy which, even in the wider territory, has acquired a specific weight important both from an economic and employment point of view. 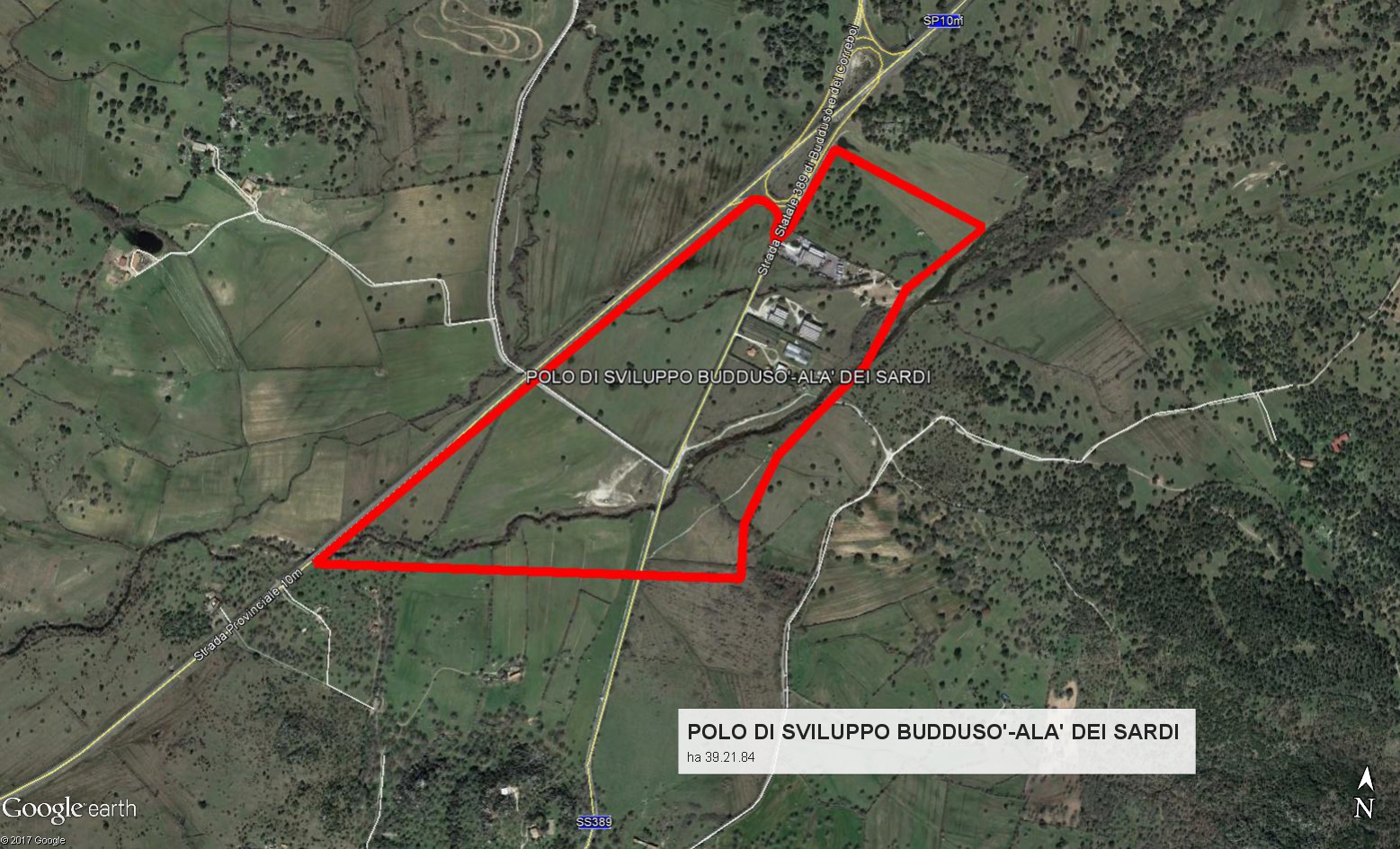 The area identified by the Municipal Administration of Buddusò has a total surface area of 508,618 square meters with a forecast of implementation planning on an area of about 400,000 square meters sized according to the applications for settlement.

The Industrial Consortium in synergy with the Municipalities of Buddusò and Alà dei Sardi has activated a preliminary consultation with the local entrepreneurial system aimed at verifying and identifying private entrepreneurial entities interested in a location within the new industrial agglomeration. The report of the investments that could potentially be made in the sector permitted to identify the size of the equipped lots functional to the needs of the entrepreneurs, and identified in about 425 new employees the occupational impact linked to the general private investment in the new sector. 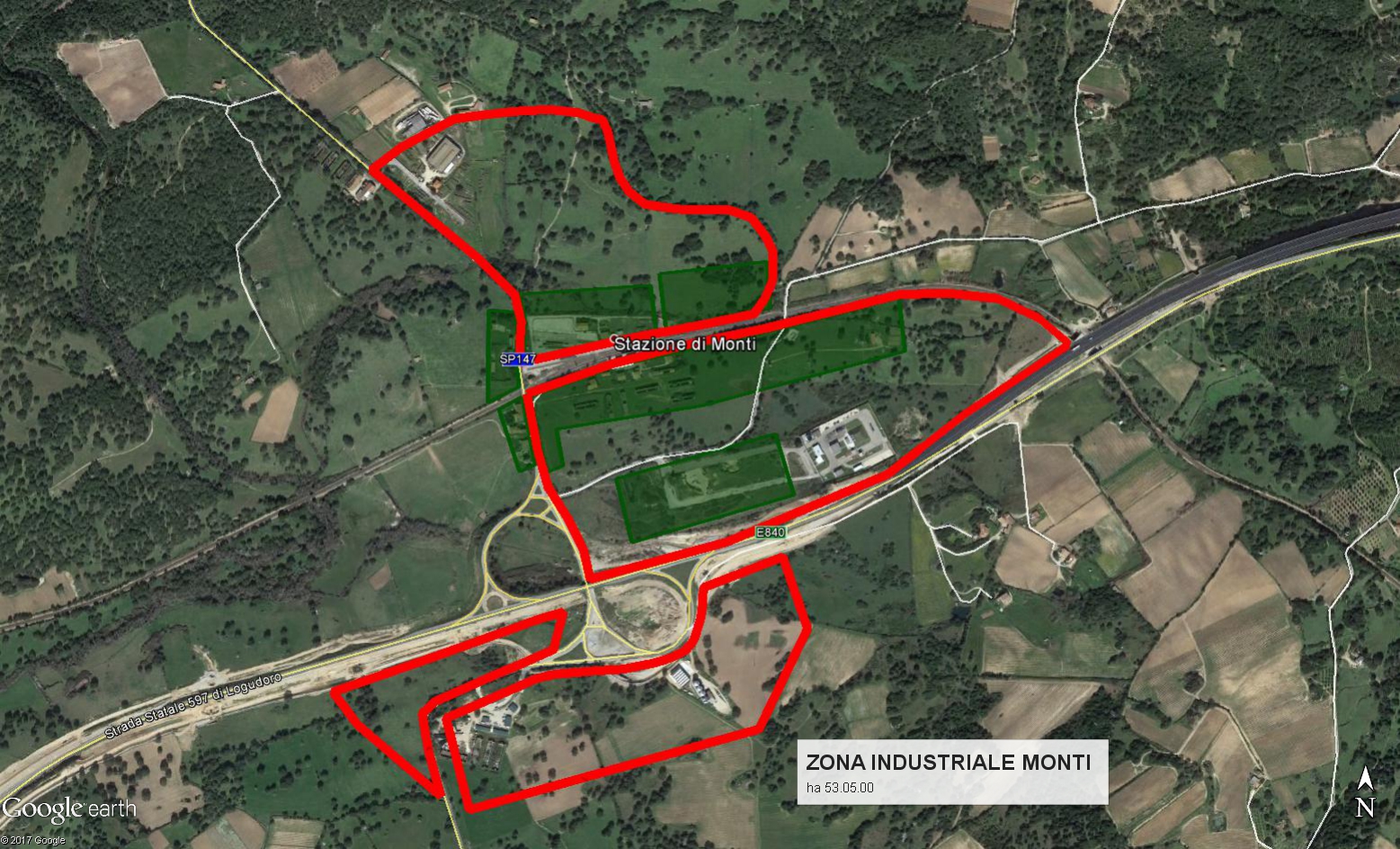 The implementation project of the industrial agglomeration of Monti identifies in the general territorial organization of the C.I.P.N.E.S., an alternative industrial district additional and integrated with respect to the two current agglomerations of Olbia and Buddusò-Alà dei Sardegna; the total area of the sector is totally included in the Monti municipality administrative territoryand measures 530,500 square meters.

The concerned area is located about 2.5 km. from the northern outskirts of the urban centre of Monti in the Monti Scalo area, in a mixed flat and hilly territory. It includes three sectors separated from each other by the road network of the S.S. Provinciale 199, the S.S. Sassari- Olbia and the railway line. It is located at a distance of about 20 km. from the current Olbia industrial agglomeration. The the reference territory is that of the new industrial agglomeration of Monti, but further urban areas can also refer to it, especially in relation to the new territorial scenario coinciding with the enlargement of the new axis of the S.S. Sassari- Olbia including its strengthening capacity of settlement attraction linked to the high level of territorial accessibility and, in particular, to the direct connection with the industrial pole of Olbia.

The construction of the new industrial area fully prefigures the functional system of settlement opportunities within the competence of CIPNES, made up of different agglomerations, with a strong level of mutual transport relations and accessibility, capable of providing an articulated and differentiated offer of settlement opportunities to companies in different sectors, with the creation of "specialized" agglomerations in relation to particular types of companies and production chains.

The lots forecast for production activities and services has been defined with the aim of creating lots with compatible dimensions according to the needs of private investors. With reference to the most directly productive destination, a total of 332,999 sq.m. have been identified, with lots of very variable unit sizes, between minimum values of about 1300 sq.m. and maximum values over 10,000 sq.m.. The maximum coverage ratio indicated is 50%, the maximum height of the buildings is 11.00 m. and the maximum volume that can be built is identified as the maximum theoretical settlement potential, deriving from the use of the maximum coverage ratio and the maximum height of the buildings.