The municipality of Olbia has a population density (ratio of inhabitants/kmq) more than twice that of Sardinia and more than three times that of the Gallura territory . The city expresses a strong appeal to the population of the interior, resulting in a demographic shift that can be basically defined as a migratory flow from the interior to the coast, richer in productive initiatives, infrastructure and services.

Olbia differs from the provincial and regional average to have a younger population, a sign of demographic dynamism and a higher birth rate.

The active population flow (working age population whose percentage in Olbia is close to 70% of the total) from inland to coastal areas has important effects on the demographic dynamics of the province: the appeal of young people in coastal municipalities, thanks to the opportunities offered by the tourism and services sector, it increases consumption and the local economy and influences the lowering  resident population average age of the in coastal areas. On the contrary, the flow of migrants from the inner areas of the younger generations is helping to weaken, with a multiplier effect, the well-being, consumption and income generated in the inland municipalities, increasing the negative trend of these areas and ultimately leading to the progressive ageing of the population. 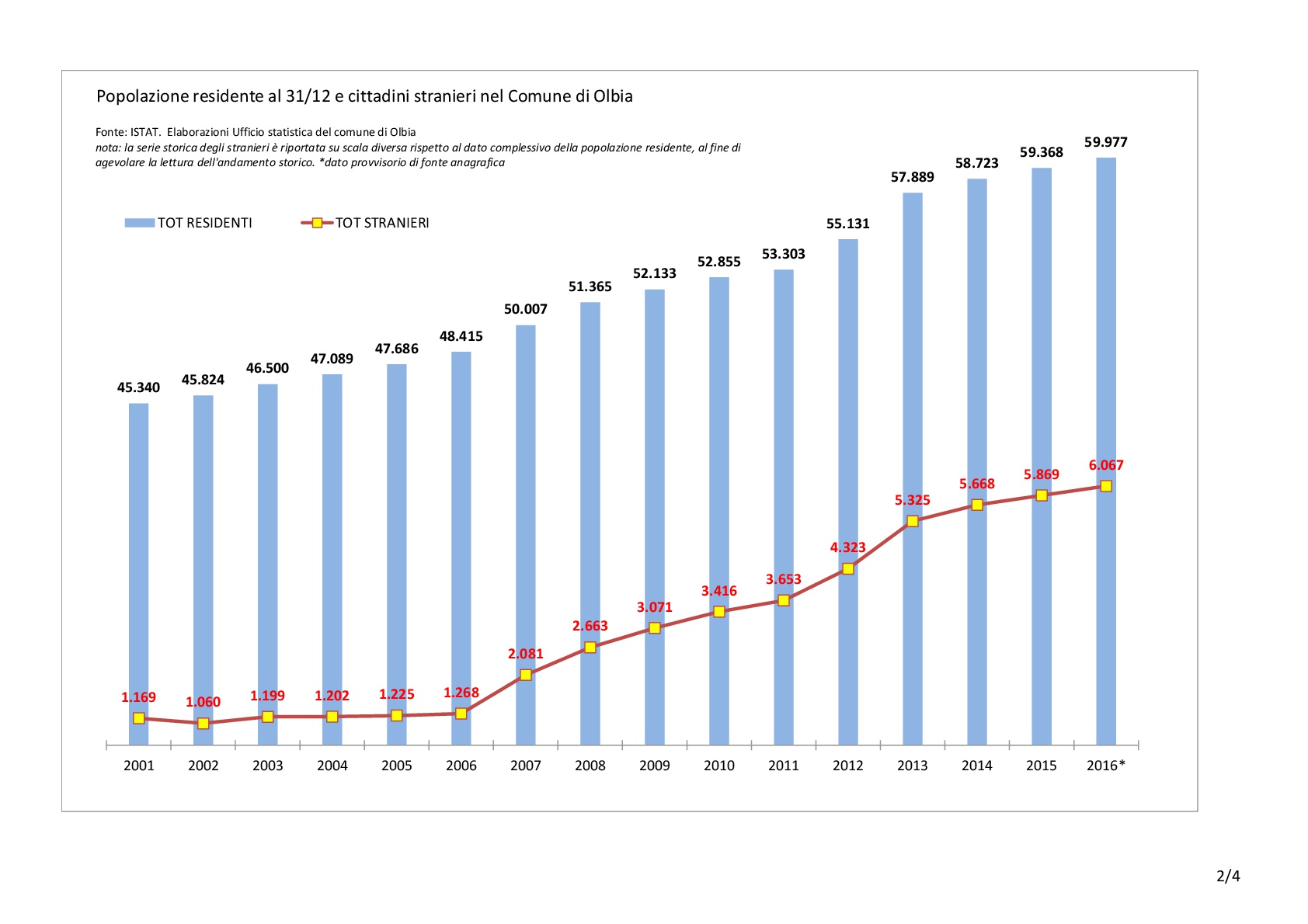 Among those subscribers are highlighted in a different colour, transfers of residence from other municipalities, those from abroad and those due for other reasons (e.g. administrative corrections).

The graph below, called the Pyramid of Ages, represents the distribution of the resident population in Olbia by age, gender and citizenship as of 1 January 2015.

The population is reported by five-year age classes on the Y axis, while on the X axis there are two mirror bar graphs with males (left) and females (right)

In general, the shape of this type of graph depends on the demographic trend population, with variations visible in periods of strong population growth or birth declines due to wars or other events.

In Italy it had the shape similar to a pyramid until the 1960s, i.e. until the years of the demographic boom.

In the Municipality territory of Olbia there are 18 nursery schools for children aged between 3 and 6 years. For children from 6 years old and up, there are 12 primary schools. There are also 4 secondary schools.

As far as secondary school is concerned, there are institutes in the city:

The Amsicora High School I.P.I.A. is furnished by a computer laboratory for 3D design on particular extensions in the nautical field.

CIPNES, by deliberation of the Consortium's General Assembly no. 3/2016, has joined the network of educational, training and local authorities called Olbi@inLab, whose purpose in implementation of the National Digital School Agenda is the implementation of interventions and initiatives aimed at creating an innovative pole for the promotion of widespread actions of school-work alternation in the of North-Eastern Sardinia territory. CIPNES is committed to providing an equipped space within the PTE Multifunctional Pole under construction in the production district of Olbia.